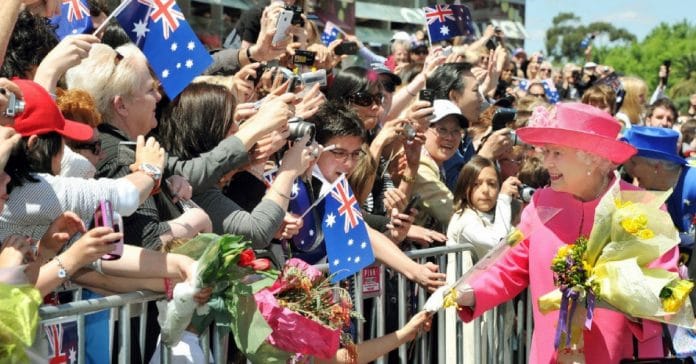 If you’re outspoken about Indigenous rights in Australia, you’ve most likely been told to stop living in the past.

So we’ve decided to list 7 things that show it’s actually white Australians who are living in the past. We don’t want people reading this to feel we are attacking anyone. We want to highlight how “outdated symbolism” is still dominating Australia’s so called national identity. We want to challenge Australia to move on and help create a new, genuine national identity together. We hope you will see the irony the next time hear someone say stop living in the past.

Let’s get started on some of that irony below.

Let’s start with the most obvious symbol, the flag of the United Kingdom still dominates Australia’s national flag. In fact many items on this list are connected in some way to the influence the Crown of England has. While many Commonwealth countries have gained independence and forged a new identity, Australia still clings on to these outdated symbols of the Crown.

The imaginary claim that Captain Cook discovered Australia still lives on today. Even though the oldest continuous civilisation had been in Australia for over 60,000 years before Captain Cooks arrival and even though other European explorers had traveled before him and even though people from neighbouring countries were trading with Aboriginal and Torres Strait islanders, Captain Cook is still treated in Australia like the first man to walk on the moon. Australian politicians love him so much, they want to build even more statues of him at a huge cost that runs into millions of dollars.

3. Obsession with the Royal family

Australians have a huge obsession with the Royal family. From weddings, royal visits and defending the Queens Birthday holiday, many Australian simply cannot imagine being separated from the Crown even though 16,000 km of land and sea already does the job.

4. Swearing oaths to the Queen

The so called nation of Australia was created in 1901 but to this day, all politicians, all police officers and members of the defence forces have to swear an Oath of Allegiance to the Queen. How can there be a true national identity with defence personnel and politicians being forced to say, “I do swear that I will be faithful and bear true allegiance to Her Majesty Queen Victoria, Her heirs and successors”, and police officers forced to say, “I do swear that i will well and truly serve our sovereign lady the Queen”? The days of empire are long gone, it makes no difference if Australian politicians and police swear an oath to the Queen or a Quokka, so please move on and stop living in the past.

What’s Royal about the Royal Australian Air Force, Navy or Army these days?

Yes, who could forget that every time you go looking for some coins, that Royal Crown lady pops up again. Those coins are printed by none other than the Royal Australian mint.

Do you know when the anthem was written? (1870’s) Do you know who wrote it? (A Scottish man) Have you read the original lyrics to the song? The song is so out of date it isn’t funny. I cannot name another song that goes out of its way to celebrate race superiority (perhaps some German speakers can).

What are you doing Australia? It’s time to drop that $#%&.

So there you have it… 7 signs that white Australia is living in the past. The next time you hear someone using that line on people standing up for Indigenous rights, remind them of how ironic it is to be saying that.

Australia’s current national identity is dominated by outdated symbols of the past. New populations of immigrants have arrived since the first European colonisation began. It was wrong to force our people to assimilate to this prescribed identity and it is wrong to expect non Anglo Saxon migrants to do the same.

Indigenous people in Australia are looking to the future. We are talking about finding new ways forward, creating agreements and treaties that should have happened over 200 years ago. The only people holding us back are the ones clinging on to these outdated symbols of the past.

Welcome to Country is an Independent Indigenous news/media website. We publish news and views that are rarely seen in Australia’s mainstream media.