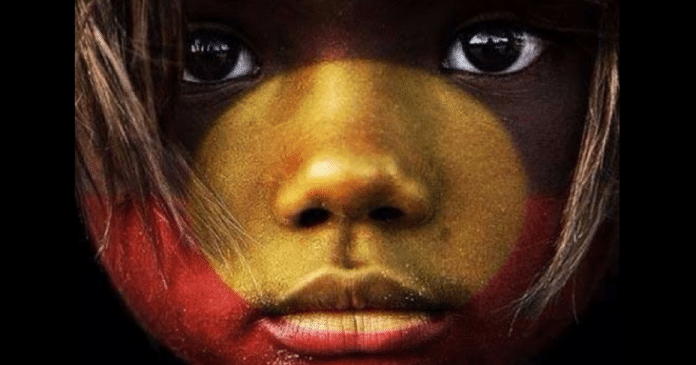 We always hear from non-Indigenous people that we get so many benefits. In reality the benefits are few and far between and usually come with many strings attached. Another reality is that we are still being exploited far beyond any benefits could ever compensate for. Give us a moment to explain some of the realities of how we are still being robbed today.

Fake art – Australia is currently overrun with cheap imported fake Aboriginal art from Indonesia & China. Art has the potential to be a strong source of income for our people. We always hear about the term “welfare dependency”, well what about the term “fair go”? You protect farmers by banning foreign imports of bananas etc. Why won’t you protect us? We are trying our best to promote Indigenous artists and encouraging people to buy direct, but how can we compete when airports and tourist markets are overflowing with fake art?

Native Title – You often hear about Native Title celebrations when it is awarded, however native title is not land rights. If Traditional owners are not careful, they can soon find out that Native Title offers very limited protection from large mining companies who are always backed by the government to overturn any objections we have about how we want things to happen on our land. Native title holders should check out the economic treaty recently signed by the Wik people in Cape York, which gives them Independence from the government as the deal was made with investors from China.

Our Voice – This week there have been talks of replacing statues of colonial figures and moving Australia day to a more inclusive date. Many people seem quite shocked by these suggestions. We are labelled as left wing trouble makers and the conversation is quickly shrugged off by the majority in Australia. The truth is that our people have been very vocal about these issues for many years but we are silenced by the media time and time again. The media either ignores our protests or finds an incident that draws the attention away from the protest. Social media is beginning to break down these barriers however the media is trying just as hard to keep them in place.

Respect – For the past 229 years our people have survived wave after wave of attacks on our people, languages, land and culture. It is amazing that we are still here today when you consider what we have been through. From the brutal frontier wars, the introduction of European diseases, the concentrations camps and other attempts at ethnic cleansing such as the stolen generations. You would think that after all that, we would have earned a bit of respect. Unfortunately we still cop the blame for our broken communities and problems in society. We don’t just cop the blame either; we are demonised by the media for having these problems and they use this as an excuse to rob us even more. Keep reading…

Our children – The 1997 Bringing them home report concluded that the 70-80 year period known as the stolen generations was an act of genocide. A decade later Kevin Rudd said sorry for this period but figures show that more Aboriginal children are being taken away now than ever before. Doesn’t sorry mean that you won’t do it again? We know that in some cases children do need to be taken away, but if you listen to our Elders such as those from the Grandmothers against removals campaigners, they want our children to be kept within our culture and extended family groups.

Our communities – Over the last few years, the government has tried to suggest that the solution to broken communities is to close the communities all together and herd our people to the fringes of larger towns and cities. While this may seem to make sense to outsiders, figures show that we are healthier and happier on our traditional lands. In case you didn’t know already, there have been large nation wide rallies happening in recent years to show the government that we won’t be bullied off our lands. Now it seems the government is trying different ways to break down our communities even further with a significant reduction in funding, implementation of the basics card and making it easier for our people to be sent to jail with new rules brought in that include jail for unpaid fines and controversial amendments to the bail act in the northern territory which take away the power of the judge to grant bail when they feel the circumstance do not require jail time. This has led to some of the highest imprisonment rates in the world. Aboriginal deaths in custody continue to happen at an alarming rate as well.

Justice – So what is going on in Australia? Is the government too stupid to see the big picture? Even the United Nations have pointed out that the government has got things awfully wrong. So where is the change, where is the justice? I think the government is intentionally robbing us. Their dreams of assimilation and conquest still linger. You can see it in their refusals to change the date of Australia day and removing the monuments of those men responsible for the deaths of our ancestors.

I wish I could follow up these points with a solution but I think a solution will only come with more awareness about these issues. Change will come through International pressure, but without awareness, there will continue to be no pressure. If you want to see things change, then please share this message far and wide.

Welcome to Country is an Independent Indigenous news/media website that is designed to provide a voice for Indigenous people in Australia. To have your voice heard through a published article like this, contact us via our Facebook page or via our contact page.