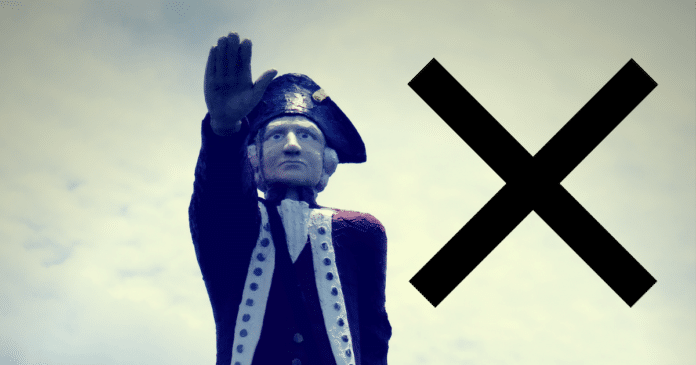 As America tears down their statues and monuments that reflect its racist past, white Australia begins questioning their own.

It’s odd that we have had to wait till now for this conversation to start. Aboriginal people have been pointing out the indecent realities for many years now. There was a lot of discussion across Indigenous social media channels when a new statue dedicated to Lachlan Macquarie was unveiled in Sydney back in 2013. Well at least you’re here now, so let us start by laying out a hit list of what monumental changes are needed.

Lachlan Macquarie – 1st and foremost this man who blatantly ordered the massacres of Aboriginal people (most notably the Appin massacre), doesn’t deserve to be revered as a colonial hero. Not now, not ever!

Captain Cook – If you want to keep his statues, fine. But please remove the Nazi style version of him in Cairns. It’s also advisable that you actually state the truth on the inscriptions of Cook statues. Discovered won’t fly with us any longer.

John Batman – He has been honoured throughout Victoria but the man is known to have been involved in massacres of Tasmanian Aboriginals. He has been honoured through statues and even has an electorate named after him. There are talks of the electorate been renamed. But what about the statues that commemorate is so called treaty that involved an exchange of axes and blankets for the land where Melbourne sits today?

Frank Jardine – This famous QLD pioneer lead a murderous expedition from Rockhampton to Cape York. Frank admitted to personally killing up to 47 Aboriginals with over 200 killed in total by other members of his expedition. Today the Jardine river is named after him as well as numerous other streets and buildings throughout QLD.

Thomas Mitchell – This well known explorer has a NSW town named after him. There are also many other plaques and memorials that serve to honour a man that was involved in the killings of at least 7 Aboriginal men in NSW. Mitchell also has a highway named after him and was Knighted by the crown for what he achieved in Australia. Australian history is truly sickening!

Alfred Canning – A colonizer who opened up huge areas of Central Western Australia for farming. He is known to have been responsible for numerous and often brutal Aboriginal deaths in the process. It’s time to rename the huge electorate named after him.

Angus McMillan – Another colonizer who has huge areas of land named after him in Victoria’s Gippsland region. The truth is starting to eat away at Angus however as even members of his own family highlight the atrocities that occurred to Indigenous people in this region under the eyes of McMillan.

Robert Towns – Did you know Townsville was named after a slave trader? Robert Towns is also honoured with a statue in the city. There have been calls for years to bring change to the way the man is remembered. Recent protests were made by descendants of the Pacific Islander slaves that were brought to the region under Robert Towns control. Perhaps Thurstonville would be more appropriate?

Let us know in the comments who else needs to be brought to account. We aren’t going to comment on the process of how these statues should be removed but we have come up with a great list of suggestions to honour Indigenous people with statues you might like to check out.

Welcome to Country is an Indigenous news/media website that aims to provide an Independent voice for Aboriginal and Torres Strait islanders throughout Australia. If you would like to have your very own article published it is as easy as contacting our Facebook page or our contact page.