Let’s take a look at 18 Aboriginal artists who’s art went viral on social media. When their Aboriginal artworks get posted, they are swamped by thousands of likes/loves/re-tweets and shares. Let’s dive in and explore who’s really making a name for themselves out there.

Michelle Possum Nungurrayi – Showcases the beautiful colours of the central desert that many of us will never live to see. Her sizable Aboriginal art often take days for her to complete. Art truly runs in her family with her sister Gabriella who herself is an established Aboriginal artist as well as their father, Clifford Possum Tjapaltjarri.

Nathan Patterson –  Nathan burst on to the scene around 4 years ago with his ever evolving modern Aboriginal art. He has been commissioned for numerous large scale mural projects as well as featuring on several AFL Indigenous jerseys. Nathan is not afraid to try new things and last year began experimenting with feather paintings and Facebook went into overdrive thanks to his creations.

Winston Walford – Is the King of perfection. When you look at his modern Aboriginal art, you won’t believe they have been painstakingly created by hand. One of his unique abilities is to create thumbprint replicas on canvas. You can see his artwork below and on his page but to really appreciate his work, you have to see it in person. Winston was our first featured artist on Welcome to Country earlier this month.

Tradara Briscoe – A young Aboriginal woman from central Australia who now calls Darwin home. Tradara is already creating waves on social media and internationally with her Aboriginal art blazoned not only on canvas but on fabrics & handbags. Her skills are truly out of this world.

Allan Mckenzie – Allan has been growing from strength to strength and every time he gets busy, social media goes into a frenzy. Whether he is designing tattoo’s, painting on canvas, painting on didgeridoo’s, making didgeridoo’s or playing didgeridoo’s, Allan is always feeling the love online and that has transitioned over to success after being featured recently at an International exhibition.

Jordan Roser – Another King of perfection! His dot work is out of this world. Jordan’s inspiration for his Aboriginal art comes from deep within. His artworks are an expression of his history, depression and his spirituality.

Ronald Edwards Pepper – Is a Gunai/Kurnai artist based in Morwell, Victoria. He is a respected artist and is a strong community leader who helps promote Indigenous culture through his art and also by conducting welcome to country ceremonies in the region.

Nerolie Blurton – Is the queen of the west. Her unique, modern & spiritual designs are almost always full of colour. Nerolie is an established artist who is quite well known for her Aboriginal art.

Julie Dowling – Another wonder from the west, Julie is a proud Badimia woman. One of her most striking paintings, is her portrait of Walyer. Julie has a unique style that is easily recognisable once you are familiar with her work.

Loretta Egan – Is a Yamitji artist from Western Australia. Loretta paints in a number of different styles and some of her paintings are truly mesmerizing. Not only are her colours vibrant, she has an ability to make it look like her painting are coming off the canvas right before your eyes.

Elizabeth Close – The next time you’re in Adelaide and spot some public Aboriginal art, there is a strong chance that it was created by her. Elizabeth is an Anangu woman based in Adelaide. She is an emerging artist that is quickly making a name for herself in the city and nationally across social media too.

Jandamarra Cadd – Is an established artist who is most well known for his portrait works created with dots. Jandamarra spends more time truly getting to know his subject than he does painting them. It is through this connection that really brings his artworks to life.

Garry Purchase – Is another emerging artist who is another King of perfection. Interestingly, Garry was a drummer for over 20 years and has only been painting since 2013. You wouldn’t believe when you see the incredible paintings that he has created.

J.J Lane – Shot to fame after being featured on Young Black n Deadly’s Facebook page. What is so remarkable about this artist is her age. She was only 14 at the time and already creating detailed Aboriginal art. Since that time her skills have only been improving as she realises that there is a wonderful career ahead with her art.

Daren Dunn – Chances are that if you have seen a pair of football boots painted with Indigenous designs, it was painted by Daren. He has painted custom orders for our Rugby League stars as well as Indigenous boxers. He has helped design jerseys and can paint on just about any kind of sporting equipment.

Chern’ee Sutton – Is the artist behind the incredible NRL Indigenous all stars jerseys. There is so much going on in her designs that you could spend half an hour studying the different features included in her work. Chern’ee has also been commissioned to work with the commonwealth games team by designing the marking and story of the games mascots.

Lee Anthony Hampton – Lee is the man behind Koori Kicks Art and is another King of perfection. One of his most famous artworks was his Aboriginal flag design that features red poppy’s that reflect fallen Indigenous warriors who have died defending our lands both at home and overseas.

Danny Eastwood – Danny’s Aboriginal art brings out raw emotions from our brutal past. Some of his works have featured prominently across social media and have helped spark the conversation that is often ignored in Australia’s society. Danny also works on many community projects too.

Well there you have it! We hope we have helped unearth some serious talent for your newsfeed. Who knows, you might be tempted to purchase some art directly from the artists. To follow these artists, simply click on their names and that will take you to their social media pages. If you are an upcoming Indigenous artist not featured here, please get in touch with us as we can always do a follow up article to this one.

*The featured link image of this article is by Tradara Briscoe 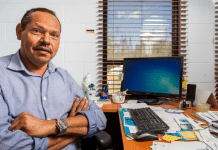 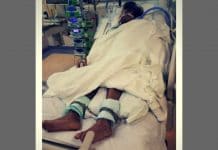