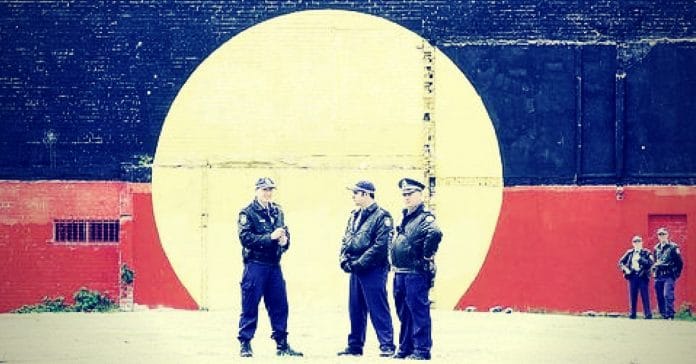 Since 1971 the Aboriginal flag has grown to become one of the most powerful and iconic symbols for Aboriginal people across Australia.

Ever since the Aboriginal flag was first flown publicly in Adelaide’s Victoria Square in 1971, the Aboriginal flag has become arguably the most powerful symbol of resistance within the ongoing fight for land rights and basic human rights. The flag has been at the centre of protests and other monumental occasions in recent history. To this day the Aboriginal flag provokes both pride and tension within Australian society. You might be surprised to learn this didn’t happen by accident, but rather by design and perfect timing.

The flag was designed in 1971 by Harold Thomas, a Luritja man from central Australia, who at the time had recently graduated with honours from the South Australian School of Art in 1969. Thomas felt the need for a flag after attending the National Aborigines Day march in 1970 where the Union Jack was flying front and centre. Over the next few months while working at the Museum of South Australia, Thomas came up with a number of designs but finally (with the help of Gary Foley) chose the current Aboriginal flag.

Although the design may appear simplistic, the meaning of the Aboriginal flag and Thomas’s art background helped to create one of the most powerful weapons against the governments assimilation agenda. The Aboriginal flag’s meaning became a source of pride and reinforced our identities as Aboriginal people. Thomas was careful to create a flag that all Aboriginal groups could relate to. Putting the black on top of the red was also a deliberate act by Thomas to create an unsettling effect on those who saw it. According to Thomas, having a darker colour at the bottom would be more balanced and natural, much like looking at a sunset over the horizon. But Harold Thomas purposely flipped the colours around to create a feeling of unsettlement.

Meaning of the Aboriginal flag

Red – The red symbolises the land we walk on and red ochre.

Yellow – The yellow represents the sun which gives us life.

Black – The black represents our people. The fact that we walk on the land was another reason why Thomas felt it was appropriate to put black above the red for his design. Thomas also felt it was essential to incorporate black into the flag after witnessing the power the black consciousness movement was having in America. Thomas has stated that all three colours (in ochre form) were consistently prominent among the Indigenous artworks he handled at the South Australian Museum.

Acceptance of the Aboriginal flag

The Aboriginal flag was first flown on the 12th of July 1971 in Adelaide as part of National Aborigines Day. After witnessing the symbolic power the flag had on both Aboriginal and non Aboriginal people, land rights activist Gary Foley took the Aboriginal flag to Sydney where he campaigned for the flag to be adopted in Redfern by the Black Caucus. According to Foley, he is not sure if he took the first original Aboriginal flag from Adelaide. The flag that he took eventually reached Canberra but the whereabouts of these flags still remain a mystery.

During 1972, the members and supporters of the Aboriginal Tent Embassy were also subjected to brutal treatment from authorities. This brutality actually helped to build a connection to the flag for Aboriginal people who heard the news in other regions. The Embassy was campaigning for all Aboriginal people and to see those campaigners being attacked was an attack on us all. From that time, we became united under one flag.

It was at this time that our cultural survival was hanging by a thread. After years of massacres, slavery and the stolen generations that aimed to assimilate our cultures, the Aboriginal flag became a life raft that helped us find our feet and gave us renewed focus and reaffirmed our identities in a new world that was forced upon us.

From the time images of the flag were broadcast around the nation in 1972 a new symbol of Aboriginal identity was born. By 1977, The City of Newcastle became the first council in Australia to fly the Aboriginal flag. During the 1982 Commonwealth Games in Brisbane, the Aboriginal flag was flying high once again. This time there were dozens of flags, plus there were now flags on t-shirts and badges that were seen on the streets and inside the main QE II stadium. Once again, the media helped spread the news of these actions across Australia.

In the 80’s and early 90’s, Peter Garrett, the lead singer of Midnight Oil was often wearing an Aboriginal flag shirt as he performed around Australia at the height of the band’s success. He became one of the first in a long list of celebrities to eventually wear or promote the Aboriginal flag in front of thousands of fans.

In 1994, Cathy Freeman made national headlines when she ran a victory lap after her 400 metres win with the Aboriginal flag at the Commonwealth Games in Canada. She faced heavy criticism for her actions by members of parliament and the head of the Australian Commonwealth Games team Arthur Tunstall. Freeman went on to defy the critics by flying the Aboriginal flag again at the games, at International titles and most famously at the 2000 Sydney Olympics.

In 1997, Hollywood sci-fi film Event Horizon featured Aboriginal flags on the uniform of Hollywood actor Sam Neill. The design appeared to be an Australian flag with the Union Jack replaced by the Aboriginal flag.

In 2000, Redfern’s iconic Aboriginal flag was painted up by former Tongan born world champion kickboxer, Alex Tui at the Block. In the same year we saw 250,000 Indigenous and non-Indigenous people march with the Aboriginal and Australian flags across Sydney Harbour Bridge as part of the Walk for Reconciliation. On May 28th, both flags were also flown together for the first time on top of the Sydney Harbour Bridge on that day. The Aboriginal flag was also flown at Olympic venues during the 2000 Sydney Olympic games.

In 2012, Indigenous boxer, Damien Hooper, wore an Aboriginal flag t-shirt as he stepped into the ring at the London Olympics. Even though the flag was now an official flag of Australia, the Australian Olympic committee demanded Hooper to apologise for his actions to which he refused and declared he was proud of what he did.

In 2017 a petition was started to have the Aboriginal flag flown on top of the Sydney Harbour Bridge for 365 days of the year. After several months the petition received over 80,000 signatures and gained the support of the Labor party in NSW with the current opposition leader Luke Foley making an election promise to fly the Aboriginal flag side by side with the Australian Flag.

With the onset of emojis used on social media, the demands for Aboriginal flag emojis grew louder and louder. In 2017, twitter launched Aboriginal and Torres Strait Islander flags that appeared whenever Indigenous hashtags were used during Reconciliation Week. Despite calls for Facebook to introduce the Aboriginal flag emojis, the worlds largest social network has failed to do so and has left users to get creative with red, yellow and black heart or circle shaped emojis. In late 2017, Snapchat users were delighted to discover that Aboriginal flag stickers appeared after a regular update. A petition was also started in 2017 calling on Apple to include the Aboriginal flag among the other flags of the world currently present to all users.

In an intriguing move by the government, the Aboriginal flag was granted status as an official flag of Australia on 14 July 1995. This move came under the leadership of former Prime Minister Paul Keating. The move was criticised at the time by the Liberal party who were firmly against it. At the time, opposition leader, John Howard stated that it would be a divisive gesture to make both the Aboriginal and Torres Strait Islander flag. Although the flag was granted this status, the Aboriginal flag continued to unsettle non-Indigenous Australians for years to come as seen in the case of Damian Hooper at the London Olympics and refusals of many local councils to fly the Aboriginal flag.

After the move to grant the flag official status, Harold Thomas was not in favour of the move as he believed the flag had already achieved its purpose of being recognised and accepted by Aboriginal people in Australia. He also felt the government was still not truly aware of the importance and the significance that the Aboriginal flag created for Aboriginal people.

In 1997, David George Brown, an Aboriginal man from South Australia claimed that he was the designer of the Aboriginal flag. The case went all the way to the Federal Court but there was little hope for Brown who relied on testimonials from old friends from his time in youth detention to back up his story. The court found a number of holes in the story and it ultimately did not stack up with Harold Thomas’s very public activities in 1970 and 1971 at the Museum of South Australia and his close connection and collaboration with Gary Foley.

The fact that a national flag comes under copyright rules has caused a number of frustrations. It’s not so easy to find products or souvenirs that feature the Aboriginal flag as businesses may be unwilling to pay a premium. Luckily, Thomas has no problem with Aboriginal organisations using or incorporating the flag for promotion, however some Aboriginal businesses have expressed concerns about the current arrangement with Birubi Art who Thomas awarded the rights to market and sell Aboriginal flag merchandise. There are serious allegations that Birubi Art is not promoting Aboriginal art in an ethical manner. We hope that these issues can be addressed sooner rather than later. In November 2018 the exclusive flag merchandise agreement was transferred to WAM Clothing which is believed to be owned by the same person behind Birubi Art. Indigenous activists are becoming frustrated with this partnership and there are serious talks underway to design or re-design the Aboriginal flag all together.

Before we mention where to buy an Aboriginal flag, we should mention that it is possible to collect full sized Aboriginal & Torres Strait Islander flags for free from local Federal MP offices around Australia. Aboriginal flags can also be purchased online through Amazon. They also stock miniature desk flags too. Both of these products are sold under the Carroll & Richardson – Flagworld name which is the only other business apart from Birubi art that has the right to exclusively sell Aboriginal flag products. Flagworld also offer custom made over sized flags and Aboriginal flag bunting (miniature flags on a rope). All of those items can be purchased via Flagworld’s website. 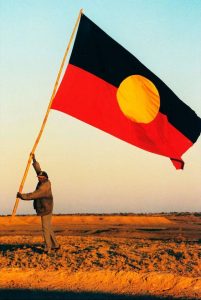 Aboriginal people were once the fastest people on the planet 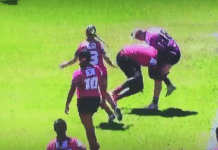