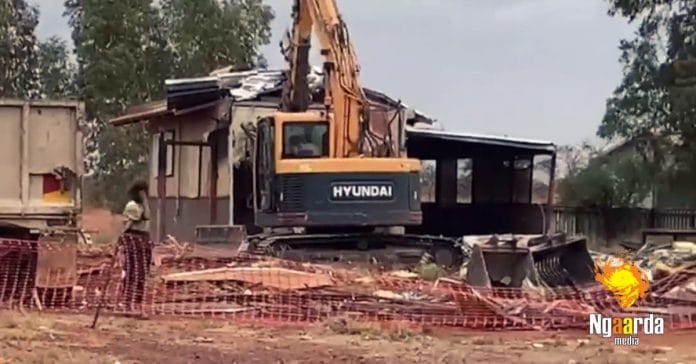 Recent vision from Pilbara based Aboriginal media outlet, Ngaarda Media, has shown multiple houses in good condition being torn down. Residents of the community say they have been left in the dark by multiple departments about what was happening to their small community which lies on the outskirts of the resource rich mining town of Newman.

According to residents, homes were boarded up several months ago after requests to repair issues with leaking water and faulty wiring were made. Since that time, many residents have been camped outside their homes waiting for repairs, however after months of waiting and unanswered questions from the department of communities, the residents are now watching on as their homes are completely demolished. So far 2 of the community’s 12 homes have been demolished and there are rumours that up to 4 more homes could be demolished soon.

Residents also believe the land has been earmarked for mining. It appears the strategy of boarding up the houses is a cruel tactic which allows government departments to say the houses were unoccupied and their demolition was warranted.

There are a lot of questions left to answer and we will be following updates from Ngaarda media to see if and how the government responds to this disturbing news.