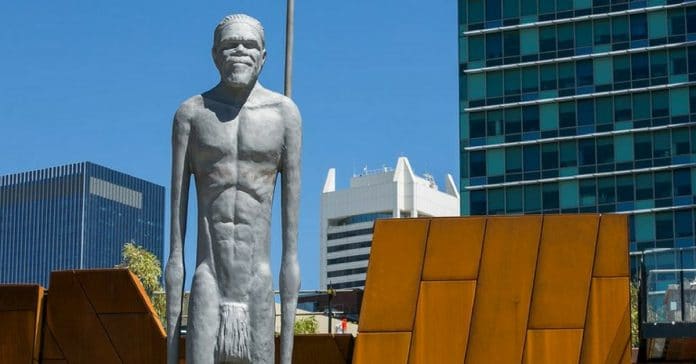 A statue of iconic Noongar warrior, Yagan, is making his presence felt to all in Perth’s new Yagan Square cultural district.

The Yagan statue is an iconic part of Perth’s new Yagan Square cultural district which is set to open on March 3. The statue was raised just over 3 weeks ago in an area which is still undergoing the final touches of construction. Even though the site is under construction, local elders were invited to perform a traditional smoking ceremony before the 9 metre statue was raised into place.

Yagan is an iconic figure for Aboriginal people right across Australia. He was a staunch resistance leader who’s story is often mentioned when discussions of Australia’s brutal and unjust colonisation are held.

This statue in Yagan Square will be the second statue of the warrior, with his other statue situated on Heirisson island that was erected in 1984.

The square also features a number of other cultural elements. Gardens will include native trees and plants from the region, with a number of tracks that cross the gardens to represent the traditional hunter gatherer lifestyles of the area. The Square’s canopies are also said to resemble the many lakes found in the region. Yagan Square also features a large digital tower that is formed by 14 reeds that symbolise the 14 Noongar language groups of the region.

It is a promising time in Perth with a statue of Nicky Winmar set to be unveiled at Perth’s new Optus Stadium later this year. We hope these new statues will inspire other cities to follow Perth’s lead. Check out our recent article titled 10 Indigenous statues that Australia desperately needs.