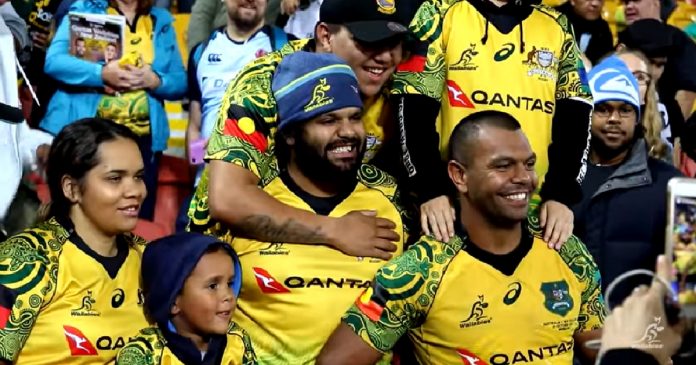 For the first time ever in Australian sport, a national jersey incorporated an Indigenous design. Many people have often questioned why New Zealand embraces Maori culture on the International stage whereas Australia (on the surface) appears to be devoid of culture on this stage. Nowhere is this more evident than when an Australian team stands face to face against the All Blacks ‘HAKA’.

Now, for the first time ever, The Wallabies can be proud to have elevated Indigenous culture to the International sporting arena. Indigenous player Kurtly Beale has been the driving force behind this dream. He was inspired not only by the All Blacks HAKA but also by New Zealand’s & South Africa’s National Anthems that are sung in two languages. The playing group also made sure that the Welcome to Country ceremony was promoted to the same stage as the National anthems. These ceremonies are often performed up to 1 hr before games and are missed out by live television broadcasts.

The Jersey was designed by Dennis Golding Weatherall, a Kamilaroi/Gamilaraay man who says the jersey represents the communities of the 14 Indigenous men who have played for the wallabies over the years. Interestingly the jersey is already sold out for anyone who is looking to purchase one.

Today, we officially launched the Wallabies first ever Indigenous Jersey worn by Kurtley Beale! Was a true honour to be part of this experience! #WallabiesIndigenousJersey 📷by NCIE

Now the question is being asked, should the Wallabies make this jersey their permanent playing jersey? It is still early days yet, so let’s hope that team officials will recognise the impact that Indigenous culture brings to a national team. All players have an internal sense of pride when it comes to reaching an international level and to add something visual gives players an extra reminder of what they are representing on the field.

With only a couple of hours to go until the historic #BledisloeCup Test, the Qantas #Wallabies will don the first ever Indigenous jersey. We look back on the week leading into the event and what it means to those involved. #AUSvNZL