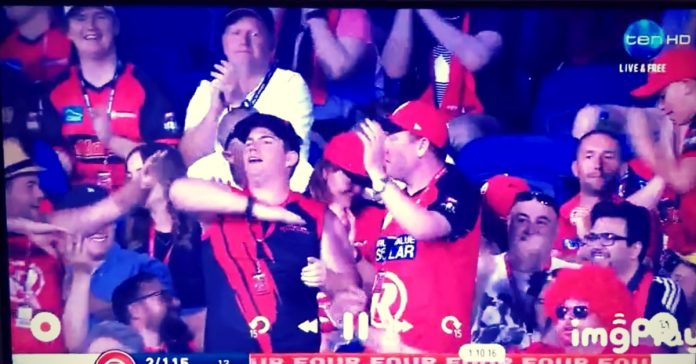 A Melbourne Renegades fan was caught giving a Nazi salute while appearing to utter the words ‘white power’ during a live TV cricket broadcast last night.

The incident occurred after batsman Cameron White hit a boundary. The TV cameras turned to the crowd as usual but viewers were shocked, disgusted and surprised to see a middle aged white guy making a Nazi salute while clearly uttering the words white power.

We’re writing this because as of right now there is no mention of this anywhere in the media. Hopefully they prove us wrong and highlight this incident so that it will be stamped out of any future sporting events in Australia. If not, we hope anyone who is reading this will share this article far and wide.

It appears that the incident went largely unnoticed by fans and officials at the event as the fan was not removed from the stadium. The incident was noticed by viewers however with some taking to social media to express their outrage.

.@RenegadesBBL please find that piece of shit in the crowd that just gave a white power salute whilst wearing a Renegades shirt and kick his fat ass down two flights of stairs.
No room for that bullshit.#BBL07

Did i just see a bloke in @RenegadesBBL gear pulling a hitler salute in the crowd to ‘celebrate’ a boundary? #BBL07 #Disgraceful @BBL

We would like to think that such a disgraceful act should result in the cancellation of the fans membership and a ban from future games. That was the response delivered to a racist AFL fan who racially abused Indigenous AFL star Eddie Betts in 2017. The ball is now in the hands of those who manage the game to take this matter seriously. The vision is clear, so will the media and the BBL officials step up to make a stand against it?