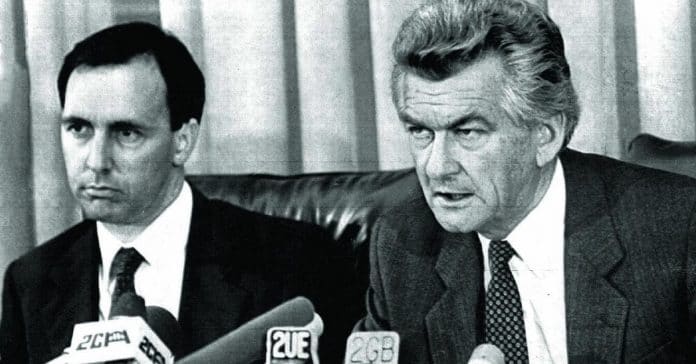 Amidst a flood of mainstream media, one Aboriginal leader has identified Bob Hawke as the greatest sell-out of Aboriginal peoples.

That leader is none other than the highly respected Professor Gary Foley. In a 2013 essay, Foley detailed the ways in which Hawke presided over the systematic destruction of the Land Rights movement which was at full strength when he became Prime Minister.

Foley highlights how the position of Aboriginal Affairs was a Senate position that no one wanted which was only taken up by long serving party members no longer capable of holding their own party seats. Hawke continued this tradition by appointing Clyde Holding who had lost three consecutive Victorian elections and had no genuine interest at all in Aboriginal issues. It seems the tradition still exists today.

Foley reflects on Hawke’s first year as Prime Minister (1983) with genuine excitement after the Hawke government announced a set of 5 principles (promises) which would still be considered as revolutionary today. 1983 was also the same year that Hawke announced Uluru would be handed back to Traditional Owners.

Hawke’s dramatic turning point or “sell-out” came after Brian Burke, who was the Premier of Western Australia began to pressure Hawke not to pursue the dream for Aboriginal Land Rights legislation. Burke was the same Premier who later served multiple jail sentences for corruption. Burke was a key player at this time with key links to pastoral, property and mining magnates and he warned Hawke that their party would lose multiple seats with Hawke’s initial position on Aboriginal Land Rights.

Hawke folded to this pressure and less than 2 years later in 1985, 4 out of the 5 principles no longer existed under a highly watered down Aboriginal Land Rights proposal.

Burke and his corporate friends weren’t satisfied with Hawke’s watered down principles either. This is when they launched a nationwide million dollar scare campaign across Australia’s media.

Aboriginal groups were well aware of the corporate funded campaign against Land Rights and they called on Bob Hawke to start an awareness campaign to calm the hysteria, however this call was ignored while he abandoned Land Rights altogether to better suit the needs of one of the most corrupt politicians of the 1980’s and his corporate mates.

By the time the Barunga statement came around in 1988, Hawke knew his hands were tied. While Hawke was a great leader for many in Australia and around the world, Hawke was simply a dreamer for Aboriginal peoples. Dreams that are still impossible and out of reach under Australia’s corporate driven, political system.

Welcome to Country is an independent Indigenous news/media website. We publish news and views which are often left out or ignored by Australia’s mainstream media.