An eyewitness was left shocked and utterly disappointed after crossing paths with what he describes as “the most obnoxious driver he has ever met”.

The alleged incident began on Monday morning when Mark Vorwerk, a Small Business Owner, boarded the Southlink bus in Adelaide together with 2 Aboriginal students on their way to school. Mr. Vorwerk believes the 2 were likely brother and sister; the boy not older than 10 and the girl in her mid teens.

When they boarded the bus, the students informed the driver how they didn’t have any money and just wanted to get to school. The 2 siblings then sat down a few seats behind the driver. The bus never left the stop, instead the driver stood up and said “you and you get off the bus now”. The young boy politely told the driver they were just trying to go to school. This only prompted the driver to sit down and switch off the bus engine.

At this point the elder sister began to get upset and told the driver what she thought of him to which the driver replied, “the bus has audio recording, now I have everything I need”. Mr. Vorwerk told the driver he would report him to the the bus company. With these actions, the bus driver very casually proceeded to call security over the incident. Soon after the 2 students gave up trying to get to school by bus. The boy returned the $5 and thanked Mr. Vorwerk for trying to help. After unsuccessfully trying to locate the bus company’s phone number, Mr. Vorwerk decided to simply take the following picture. He even asked the driver to smile to which the driver replied, “I don’t care if you take a photo, this is all on video anyway”.

Update: Mr. Vorwerk is now in contact with Southlink buses who say they have questioned the driver and will review the CCTV footage. South Link also train drivers to allow students without money to travel.

Welcome to Country is an independent Indigenous news/media website. We publish stories like this directly from the source. If you have a story that needs to go public, contact us via our Facebook page. It’s our mission to expose the grievances which our people are faced with each and every day with a long term goal of changing the way Indigenous people are treated all over the country. 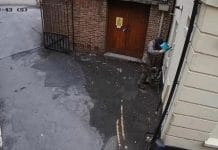