Australians love the fact Australia is seen in the eyes of the world as one of the greatest countries in the world. It is often viewed as one of the most free, fair and pleasant places to live. When news of the Australian cricket cheating scandal broke yesterday, many Australian’s personally felt a sense of shame.

For many Indigenous people however, we felt a sense of satisfaction in knowing that the world was seeing Australia in a new light. A nation that is prepared to cheat to get their way. This is not something new to us, it has been happening for over 230 years and continues today.

From the initial claim of Terra Nullius, to the massacres, poisonings, the theft of our children, the suppression of our language and culture and the ongoing exploitation of our land and waterways… Modern Australia was founded on successive acts of cheating against Indigenous people.

Our people have been vocal about the lies and deception perpetuated by Australia but our voices have largely been silenced by the propaganda that Australia promotes to the outside world. It’s not only the actions of the past that have us up in arms either. Acknowledgement of the crimes and injustices committed against Indigenous people seems to be almost impossible to achieve and in some cases they are repeating once again.

Cheating is a core Australian value! It has been ever since European colonisation.

Welcome to Country is an independent Indigenous news/media website. Help support our voices by following us on social media and sharing our articles.

Aboriginal artists who’s art is killing it on social media 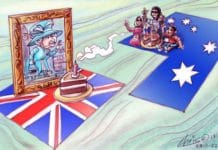