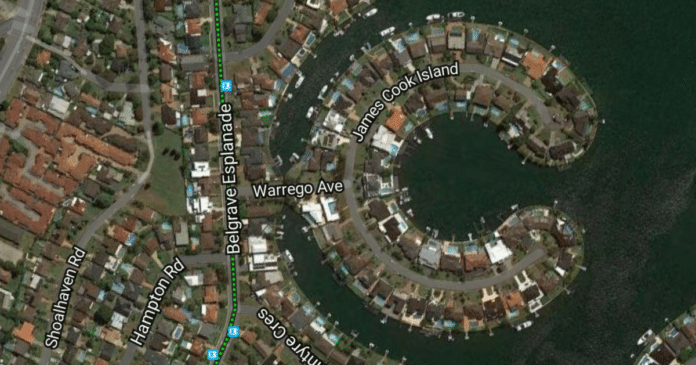 Recently a church in southern Sydney made headlines after complaints from angry residents over the Aboriginal flag being flown once a month in their posh waterside suburb of Sylvania.

We were checking the place out on Google maps when we found a more entertaining story that is sure to get the racist residents even more upset.

Firstly, the perfect ‘C’ shaped island caught our attention and we were surprised to see that it was named James Cook island (C for Cook right?). The second thing that caught our attention was the only road that connects James Cook island to the mainland had an Aboriginal name. The connecting street name is Warrego Ave, which is a Bidyara word that means ‘Bad’. So was someone having a laugh here or were the people who named it completely unaware of this fitting name?

There are a few streets in the area named after rivers such as Hawkesbury and Murrumbidgee and that gives us the feeling that the people who named it had no idea and just named it after the Warrego river which makes this story even better. I wonder if the residents will rally to get the name changed if they find out about the meaning.

The other thing that is ironic about the island, is that it is an artificial island which is very fitting for a man who made a lot of artificial claims during his life. Did you know that James Cook is often referred to as Captain Cook when in fact he was never a captain. He also tried to claim possession of the entire east coast of Australia while standing on a Torres Strait island that isn’t directly connected to the mainland. The name of the island, “possession” island has also been completely disregarded by the local Torres Strait islanders who continue to call it Bedanug or Bedhan Lag. Finally, Cook’s biggest artificial claim was that Australia was “Terra Nullius” no one’s land.

If you enjoyed this story, don’t forget to share it with your friends. You can also check out all our other stories via our homepage.

Welcome to Country is a new Independent Indigenous news/media website that aims to provide a genuine voice for Indigenous people in Australia. To have your very own story published, simply contact us via our Facebook page or our contact page.