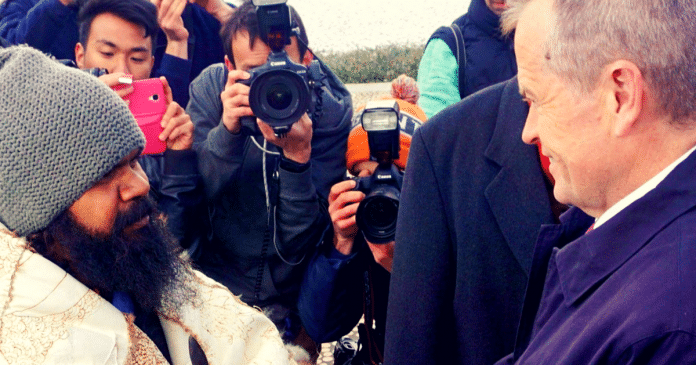 It didn’t take long however for Clinton to call out the opposition leader for hi-jacking the walk for justice and re-aligning it with a government agenda. The walk for justice demands clearly state a demand for treaty however in the Shorten’s Facebook post he makes no mention of a treaty. Shorten took the opportunity however to promote government assimilation agendas such as constitutional recognition and token reconciliation ideas of years gone by. 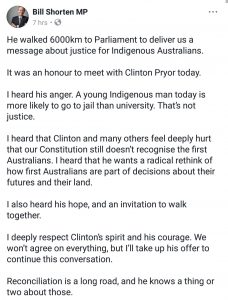 Clinton wasn’t alone in calling out the opposition leader either. Countless numbers of people reminded Shorten that Clinton was not marching for those agendas at all. But just as Bill Shorten failed to hear Clinton yesterday, he also appears to be oblivious to the condemnation he is receiving for this. As usual, he is just another politician who is out of touch and out of line with the people. 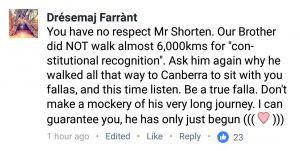 Throughout his journey Clinton has had to deal with various people trying to hi-jack his walk for justice but I think this most brazen attempt by the opposition leader surely takes the cake. But you never know, Clinton will be meeting with Malcolm Turnbull today to hear the same home truths that Pryor delivered to Shorten and the Governor General yesterday.