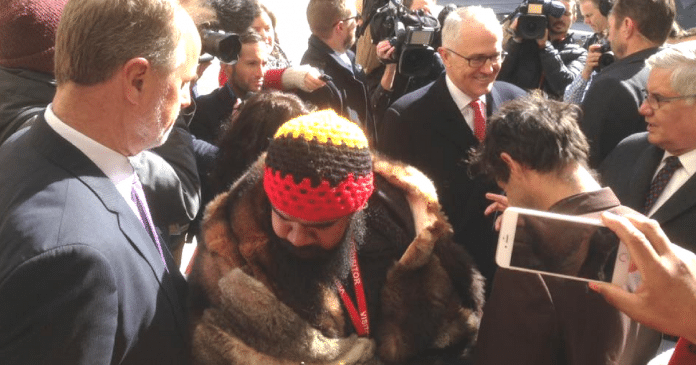 After already pushing back meetings with Clinton, Malcolm Turnbull did little to improve his image as someone who claims to be committed to Indigenous issues.

Today Clinton Pryor was looking forward to having a productive meeting with Prime Minister Malcolm Turnbull. However things got off to a rocky start when the Prime Minister refused a request to meet in front of Parliament house as a sign of respect to honour what Clinton had achieved over the last 12 months. Turnbull had already made it clear that he would not meet at the embassy, but for the Prime Minister to refuse to meet in front of Parliament house was another clear sign that he holds Clinton with very little regard.

Yesterday Clinton met with several politicians at the Aboriginal tent embassy and outside parliament house and had a successful meeting with the Governor General. Today, Clinton was advised that the meeting with the Prime Minister could only take place in Turnbull’s private forecourt/garden area which required around 30 minutes of security checks for the Walk for Justice Team to pass through.

During the meeting, a spokesperson read out the same list of demands that were read out yesterday to other members of government. Instead of listening respectfully to what the Walk for Justice Team had to say, the Prime Minister began to argue and debate the facts that were being read out before him. After it became obvious that the Prime Minister was not prepared to listen to the facts, Clinton stormed out of the meeting (as pictured in this article).

In a statement released shortly after the meeting, Clinton reminded the Prime Minister that this isn’t over yet. He urged the Prime Minister to learn how to listen and engage respectfully with Indigenous people before the next major treaty/sovereignty talks are due to occur in Canberra on November 4th.

Yesterday Clinton was also disappointed to discover that opposition leader Bill Shorten used the opportunity of meeting with Clinton to promote government agendas towards Indigenous issues while ignoring the demands set out by the Walk for Justice Team.

Got a story that you want heard? Welcome to Country is an independent Indigenous news/media website that gives a voice to all Indigenous people. Simply contact us via our Facebook page or our contact page to have your story published.