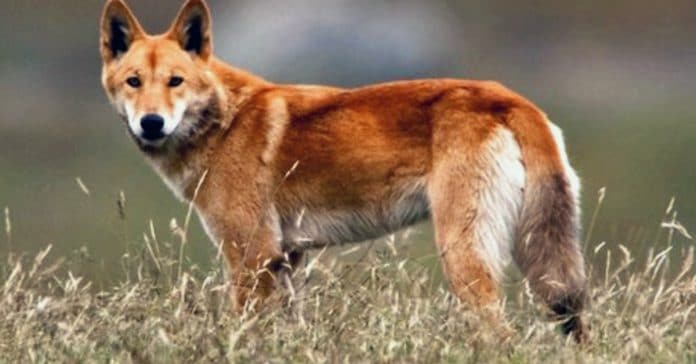 If dingoes look like a wolf and sound like a wolf, why aren’t we calling them wolves?

For years dingoes have had their status shifted around from wolf to wild dog numerous times. At present they appear to be stuck in the middle with some suggesting they are totally separate from both dogs and wolves. Sadly the most recent government changes have seen dingoes listed as wild dogs which puts them at even greater risk from hunters and livestock owners who only view dingoes as pests.

We’ve had a look at some fairly obvious indicators and we want to open up the debate about whether or not dingoes should be classed as wolves or wild dogs. Let’s take a look at the differences below.

What makes Dingoes different from Dogs?

There are a number of physical characteristics that make Dingoes relatively easy to identify. The most obvious trait is their large triangular (wolf like) ears which sit up high on the head of a dingo. The head itself is also quite wide (wolf like) and they have snouts which are generally longer (wolf like) compared to similar sized dogs. Dingoes also have longer and sharper (wolf like) teeth and skulls that are more flat from the top of the skull to the snout compared with dogs that have a more curved shape from the snout up to the top of the head.

Less obvious traits include higher intelligence, rotating wrists/paws which make dingoes excellent climbers plus a much higher range of lateral movement in their front legs, neck and head.

Are Dingoes different from Wolves?

When you look at wolves such as the Tibetan Wolf and the Indian Wolf, you will see there is very little physical difference with dingoes. When you think of wolves from North America there are obvious size and colour differences but they still share many similarities that separate both wolves and dingoes from regular domesticated dogs. We’ve listed some below.

If there are so many differences between dogs and dingoes and so many similarities between wolves and dingoes, why are dingoes still labelled as wild dogs?

Perhaps it is due to their smaller size which sees them viewed as less intimidating than wolves found in Europe and North America. But Dingoes are of similar size to the Arabian, Indian and Tibetan wolf. Another factor may be the mutual relationship that dingoes have had with people for thousands of years.

What do you think? Have the experts got this wrong?

Let us know in the comments below.