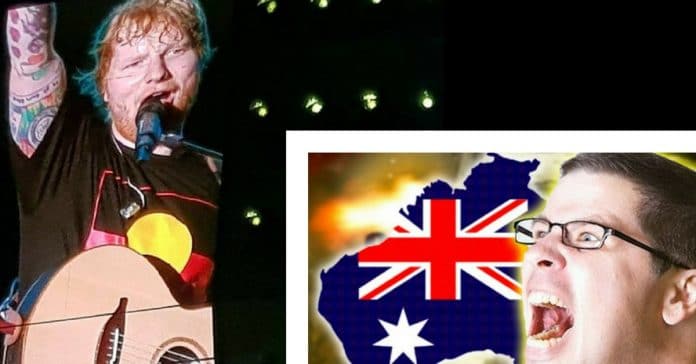 A single Aboriginal shirt and a post to social media by one of Australia’s largest morning shows was all it took to unleash a huge downpour of salty white tears across Australia.

The gesture of respect by Sheeran was well received by many of his fans, but there was a vocal group of people who couldn’t stand the fact that Sheeran would do such a thing. Some of their responses have to be seen to be believed.

But how can a flag with official status in Australia be seen as a divisive political statement worthy of boycotting the rest of Sheeran’s record breaking Australian tour? It appears he has now lost a few fans over this, but we’re positive he has gained many more less salty ones in the process.

At the end of the day it all comes down to respect.

Even though Sheeran’s gesture was a show of respect, the Aboriginal flag was actually professionally designed to create an unsettled feeling on those who see it. The flag was born at the beginning of the land rights era and it appears many people who were unsettled by the flag back then feel just as uncomfortable now when they see the Aboriginal flag. To those people, I would plea for them to stop confusing human rights with politics. Those actions are the actions of modern day colonisers.