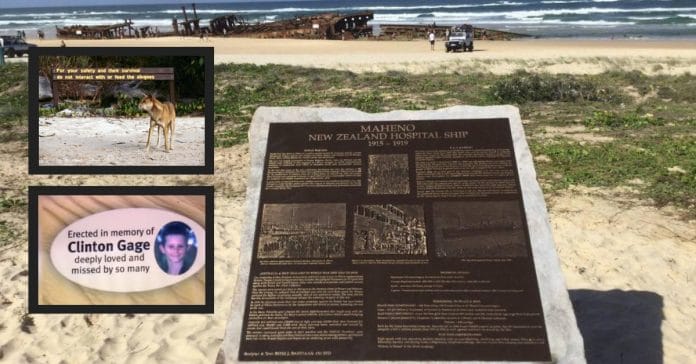 Although the area has been populated by the local Butchulla People for thousands of years, little information of their history can be found. This is a strange but not uncommon situation in Australia.

Recently there have been acts of recognition on the island such as the granting of Native Title and an official name change of the National Park, plus three acknowledgement of country signs, but one thing remains glaringly obvious…

Those in power don’t want to draw attention or publicly acknowledge the atrocities that occurred on the island during the brutal frontier period.

On the other hand the island is home to a war memorial which can be found at the site of a Shipwrecked World War 1 Hospital Ship. The Maheno Shipwreck didn’t involve any casualties as it simply broke free when it was being towed away to be scrapped.

The Information Sign at Waddy Point Picnic Site also serves as a memorial for 9 y.o Clinton Gage who died after being attacked by Dingoes in 2001.

But the majority of tourists come and go without learning about significant events that involved the local Indigenous population. On more than one occasion, hunting parties were sent out and even paid to hunt down Aboriginal people on the island.

Many Aboriginal people were shot and poisoned during this frontier conflict and there are numerous stories which detail how groups were herded into the sea. One of these events happened at the popular cliff-top tourist spot known as Indian Head which serves as a lookout for hundreds of tourists each day.

Why are the tourists being denied the chance to learn about this history? Do local and state governments feel like it will make tourists feel guilty? Or do they not want to draw attention to Australia’s brutal (illegal) colonisation?

I feel it has more to do with the latter. Fraser Island is a snapshot that reflects a scene that is happening all around Australia where very little effort goes into remembering the lives lost at massacre sites all across the country.

With this lack of knowledge, non-Indigenous people and the wider international community will remain alienated and ignorant when they hear our calls for land rights and self determination.