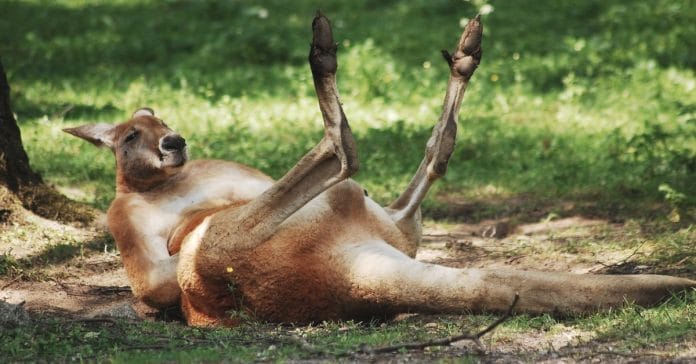 Kangaroos are without a doubt one of the most iconic animals found in Australia. But how much do you know about them? Check out our top kangaroo facts below.

I think most people know they are marsupials and have pouches for their young that are known as Joeys. This education series article will explore some unique facts about kangaroos and highlight the influence the animal has with Aboriginal nations.

The word Kangaroo comes from the Guugu Yimithirr language which is spoken in far north Quuensland. The word is also one of the first Aboriginal words ever recorded by British explorers. When spelling the word with traditional pronunciation, the word would be spelled as “gangurru”.

Many people know that kangaroos were and continue to be a popular source of meat, but kangaroos have served many more purposes than just food. For instance, did you know that Kangaroo tendons can be used like string? The tendons kangaroos use for bounding are very strong and can be used in a variety of ways. One common use is for attaching spear heads to spears.

You’ve most likely seen kangaroo skins for sale in shops around Australia. Kangaroo fur is very soft (similar to a cat). Their skins and fur are often used as mats and crafted into shoes and handbags. Aboriginal people also find many ways to use kangaroo skins for mats and for warmth in cooler regions. One fascinating invention are traditional water carriers. With great skill it’s possible to remove the bones and internal organs of the kangaroo without damaging much of the skin. Once this is completed, the skin can be used as a water carrier, much like modern day hydration packs are used today. Balls can also be made from kangaroo scrotums. These balls are used in the traditional game/sport known as Marngrook.

As we mentioned above, Kangaroo meat has been and continues to be a very popular choice of meat for Aboriginal people. When it comes to beef, (and if you’re not a vegetarian) you most likely have a favourite cut, such as sirloin, t-bone or ribs. But what part of a kangaroo is the most desired? Well it is actually Kangaroo tails that are often regarded as the tastiest part of the kangaroo.

Kangaroo’s have found themselves used as logos for clothing brands, Qantas airlines, sporting teams, Australian currency as well as the “Australian made” logo. These logos use the outline of a kangaroo body and is widely recognised around the world as it is such a distinctive animal. But do you know what a kangaroo track/print looks like? Kangaroo prints are commonly found in both ancient and modern Aboriginal artwork. Have you noticed that our website logo features kangaroo prints?

Kangaroo mimicry can be seen in a number of Aboriginal dances/ceremonies around Australia. If you think you can hop like a Kangaroo, wait until you see what thousands of years of perfection has created in the movements which involve, hopping, resting, moving with all four limbs and even fine details such as scratching. In recent years, NRL star Latrell Mitchell has celebrated scoring with what has become his signature kangaroo ears stance.

Although kangaroo meat is very popular among Aboriginal people, the meat hasn’t been widely adopted by non Indigenous people in Australia. This is a shame because Kangaroo meat is very healthy as it is high in protein but low in fat. Kangaroo meat doesn’t have visible fat and the total fat content only comes to around 2% which is much less compared to lamb and beef which have a fat content between 20% – 40%.

A group of Kangaroos are referred to as a mob. The word mob is often used negatively by non Indigenous people to describe a rowdy group of people. However the word has been adopted by Aboriginal people in a positive light to refer to family groups, with the phrase, “who’s your mob”, one of the first questions asked when meeting someone.

Kangaroos are the largest marsupials in the world with the largest reaching up to 90kg. A large male kangaroo (known as a buck) can grow as tall as a full grown man and if threatened, has the potential to cause significant injury to anyone silly enough to stand face to face with one as they can lean back on to their tails and deliver powerful kicks to your body. It’s even possible for a kick to rip open your skin. Attacks seem to be becoming more common these days but luckily deaths remain almost unheard of with only one reported human death in 1936.

Although kangaroos are a common sight in Australia, you would be very lucky to come across a kangaroo in the water. Kangaroos are actually very confident swimmers and use their tail to swim. They swim to cross rivers and use this strength to avoid predators such as dingoes and dogs. If those predators try to follow them into the water, the kangaroo has the strength to drown the animal.

Well that’s all the fascinating facts we’re going to share in this article. If you enjoyed this article, make sure to share it with your mob and check out some of our other articles in our education series.

Welcome to country is an independent Indigenous news/media website. When we aren’t breaking news stories that are often ignored by Australia’s media, we keep busy by writing informative articles like this one.