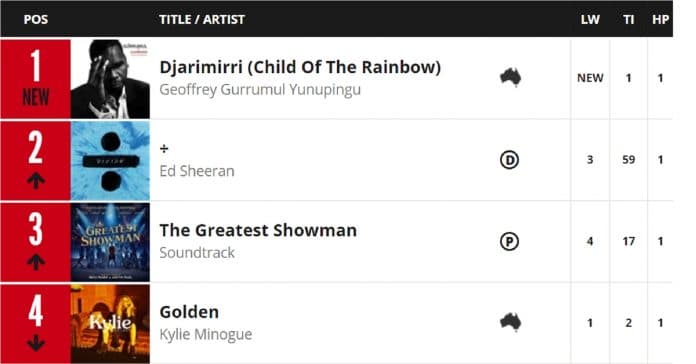 Gurrumul’s latest album has debuted at number 1 on Australia’s ARIA charts. Making it the first  Indigenous language album to do so.

The ARIA charts are based on the number of albums sold and as of this week Gurrumul’s album Djarimirri (Child of the Rainbow) is the most purchased album in the country. His album sold more copies this week than Ed Sheeran and Kylie Minogue who are ranked 2nd and 4th in the charts. It is the first time in ARIA history that an Indigenous language album has reached number 1.

Demand for the album even came as a surprise for Gurrumul’s record label (Skinnyfish) who have been struggling to keep the album in stores around the country after it was released one week ago on April 13. This isn’t the first time Gurrumul has been in the charts either; with his last 2 albums both reaching number 3 on the charts in 2011 & 2015.

Gurrumul sadly passed away last year, however he is still proving today that his music will live on. His family are proud of this latest achievement too. Last week they released a statement to announce that his music still represents them today. They are proud of him and they know Gurrumul will be proud too.

A documentary film about his incredible journey will also be released on April 25. We can’t wait to see the impact his life and music will continue to have in Australia and overseas.