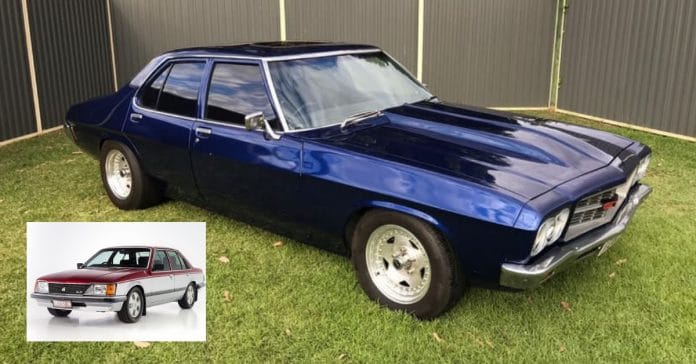 Holden has a long and proud history in Australia and at the heart of that history lies a recognition of Aboriginal culture.

After being the first in the country to mass produce cars in 1948, Holden continued on a mission to make sure the company became part of Australia’s national identity.

The 1970’s was Holden’s most successful sales period in their history. Some of the most popular models featured Aboriginal names including the Monaro (Monaro meaning high plains) and the Torana (Torana meaning “to fly”) and later models which included the Camira (meaning wind) and Maloo (meaning storm).

While this acknowledgement of Aboriginal culture is widely know to most Australians, one thing that has almost been forgotten is a distinct design feature found in some of Holden’s most iconic vehicles.

Beginning in 1971, Holden relaesed the HQ series which included the second generation Monaro, Premier, Statesman and the more common Kingswood models. The first models featured a thick boomerang shaped steering wheel as shown below. This model set an all time sales record which saw almost half a million units built.

The boomerang design became even more distinctive with the release of the HJ series which carried on the Monaro, Premier, Statesman and Kingswood names. This steering wheel featured a woodgrain finish on some models. This design continued with the later model HX & HZ series.

Interestingly, the last model to feature boomerang shaped steering wheels was actually the first generation of Holden Commodores. Which went back to a more bulky boomerang shape (shown below).

Since that time, the boomerang design has become a thing of the past with the introduction of three point and four point steering wheels and then with the onset of new technology and safety features such as airbags, we now see steering wheels that take up almost all of the available space.

This article is our way of saying thanks to those early designers who weren’t afraid of embracing Aboriginal culture. Sadly since those times we have witnessed a strange reluctance to do so which has made finding signs of Aboriginal culture quite difficult compared to the way it is embraced in New Zealand. Hopefully Australia will get back on the right track again sooner rather than later. Australia is not a European country.

Welcome to Country is an independent Indigenous news/media website that highlights stories that are often overlooked or ignored by Australia’s mainstream media.