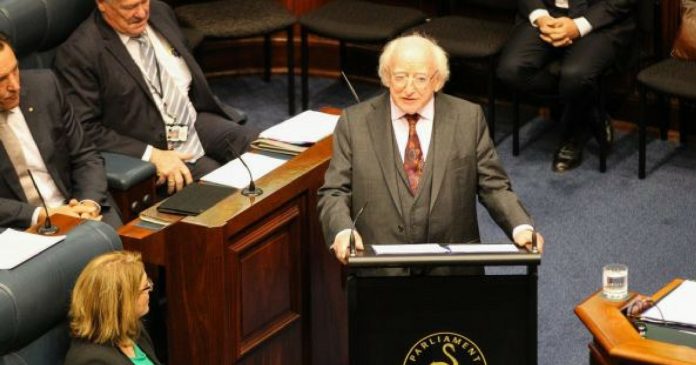 The admission was made in front of Australian politicians who are largely in denial about Australia’s colonial history.

In the first visit to Australia by an Irish head of state in almost 20 years. The President took the opportunity to admit that Irish convicts/settlers took part in the killings of Aboriginal people during colonisation. The admission was made in Western Australia’s state parliament earlier this month. The killings were part of the wider ethnic cleansing campaign that aimed to completely rid Australia of Aboriginal people.

Sadly this history is rarely spoken about within Australia’s political circles. Even though there a thousands of recorded massacre sites around Australia, some politicians still try to describe these as isolated incidents. This denial has been around for many years and is referred to as ‘the history wars’.

One of the most famous politicians to deny these atrocities is former Prime Minister, John Howard, who still stands by his words today.

It isn’t known how the Australian politicians feel about the Irish president’s admission as the media is not reporting on this story.

NITV have reported on the story where they quoted Indigenous politician, Linda Burney, as feeling refreshed to hear such honesty from the Irish leader.