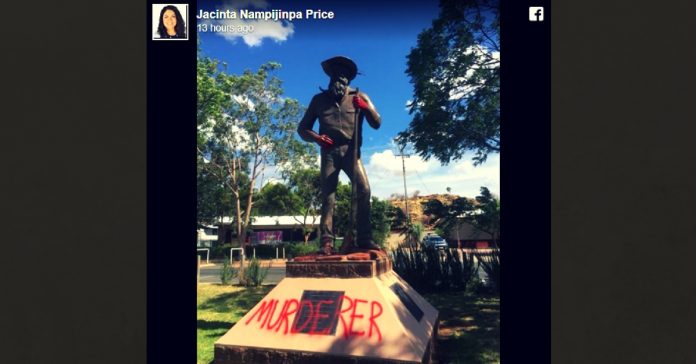 Jacinta Price has continued on with her campaign to win over the hearts and minds of non-Indigenous Australia.

Jacinta’s latest comments would be music to the ears of people like Tony Abbott and others who wish to live in denial about Australia’s brutal colonial past. Just two days after Australia Day, Jacinta has taken aim at her home town of Alice Springs where the controversial statue of John McDouall Stuart was vandalised just before January 26th. According to Jacinta, “Stuart did not murder any Aboriginal people.”

But the fact is that Stuart was responsible for the deaths of Aboriginal people. It was documented in Stuart’s own diaries about confrontations with Aboriginal people where shots were fired.

There are other accounts too. Back in 2014 there were protests against the statue by local Alice Springs residents. At the time the group were involved with distribution of educational leaflets which made note of other massacres in the region that occurred under Stuart’s leadership. Most notably the massacres of Mt Hay and Attack creek in the 1860’s.

In 2014 the small protest group were shocked to learn that the statue would be installed against their wishes. They were also disturbed to learn that Stuart’s statue would show the coloniser holding a gun and labelled this as quite sickening. When the statue was unveiled, local Indigenous elders held a protest and conducted a smoking ceremony at the site and made calls for it to be removed.

We find it disturbing that Jacinta Price is able to abuse her position by misleading the public simply to try and gain followers and improve her chances of being elected at a territory/state or national level. Perhaps we can turn this negative into a positive by getting as many people as possible to share this article. We have seen in the last week how popular Jacinta is in the mainstream media. Will they call her out for her blatant lies?

Let’s keep sharing until they do.