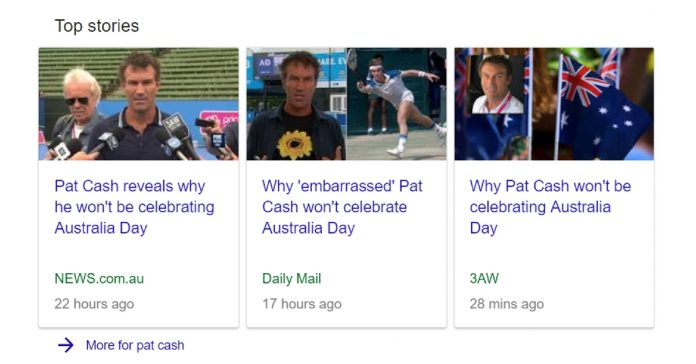 Australia’s mainstream media have totally missed the point after Pat Cash was able to highlight the problem of Indigenous inequality.

Yesterday Pat Cash took the opportunity to voice his concerns about Indigenous inequality and poverty that still exists in Australia. The majority of his 4 minute interview on the TODAY show was about highlighting the issues of poverty and the Aboriginal system that is run largely by the government and non-Aboriginal organisations.

We we’re curious about how the mainstream media would run with this story. At present, the TODAY show has tried to pretend that the interview never happened. The interview was not uploaded to their website (which is standard practice) and was not featured on their social media pages.

The story was picked up by other media outlets, however all of their headlines were focused on one statement at the very end of Pat’s interview. Pat mentioned that because of everything he has witnessed and learned about, he doesn’t feel it is right to celebrate Australia Day on January 26th.

The attempt to pretend the interview didn’t happen by the TODAY show and the re-focus of the Australia Day statement by other media sources is yet another clear sign of how Australia’s mainstream media wants to manipulate the narrative when it comes to Aboriginal issues in Australia.

One positive though is that many of our readers did share our article which focused on the core message that Pat delivered. On Facebook alone, it has been shared over 17,000 times whereas the article by news.com.au was shared around 4,000 times. It was great to see our Independent self funded website that is run on a shoestring budget get a big win over the major media networks in Australia.