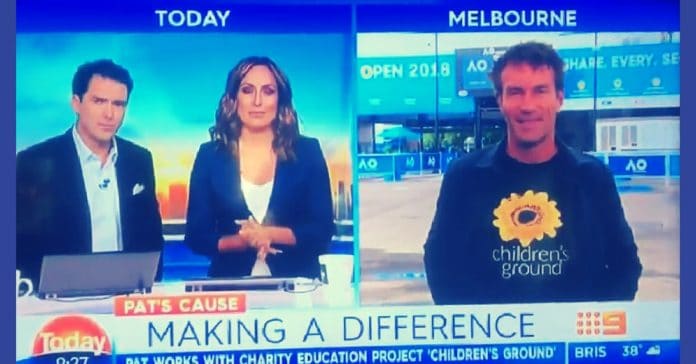 Pat Cash has emerged as an unlikely hero to stand up for Indigenous Rights on national television after 30 years away from Australia.

This morning Pat Cash was invited to the Today show for a live broadcast from the Australian Open. He was there to promote the Indigenous charity Children’s Ground. Everything appeared to be quite standard before Pat started cutting straight to the harsh truths and realities that exist in remote Aboriginal communities.

In just 4 minutes Pat Cash was able to deliver a message that many Indigenous activists have been waiting decades to have the chance to say to a national audience. Pat outlined his disappointment after his belief that Indigenous issues were improving were crushed once he returned to Australia after leaving the country over 30 years ago. He stated that he was embarrassed to be Australian. He was able to outline the extreme poverty that still exists and reminded everyone that Indigenous people are the actual land owners of Australia. He also touched on some of the recent human rights abuses where the Australian government shut the water off from remote communities. He finished off his interview by publicly stating that he personally feels that it isn’t right to be celebrating Australia Day on January 26th and labelled it as Invasion Day.

UPDATE: Malcolm Turnbull has responded to the comments with a National address speech.

We would like to thank Pat Cash for standing up and speaking his mind on these issues that have been kept quiet for too long. We will be watching closely to see the mainstream media’s response to the interview. Will they try to forget it and act like it didn’t happen or will they turn on him and try to say that he doesn’t understand because he has been away for 30 years? We have checked the TODAY show’s social media pages and we’re not surprised to see that the interview was not featured. The interview has also not been uploaded to the TODAY show website which is normally standard practice for interviews.

Celebrities speaking so candidly about Indigenous people on National Television is quite rare. Back in 2011, Hugh Jackman also slammed Australia’s understanding and lack of respect towards Aboriginal people. However on that occasion it was a Canadian television show and news of those words were not publicised in Australia at the time.

UPDATE: Pat Cash has revealed that he has lost over $100,000 in sponsorship deals since he began speaking out on Indigenous issues.

If you’re reading this and wondering what you can do to help. You can start by sharing this story in the hope that it will encourage more people to speak out. If you would like to help support Children’s Ground, you can check out their website where you can make a purchase from their online shop. You can also make a tax deductible donation too. Children’s Ground also has volunteering and work opportunities.