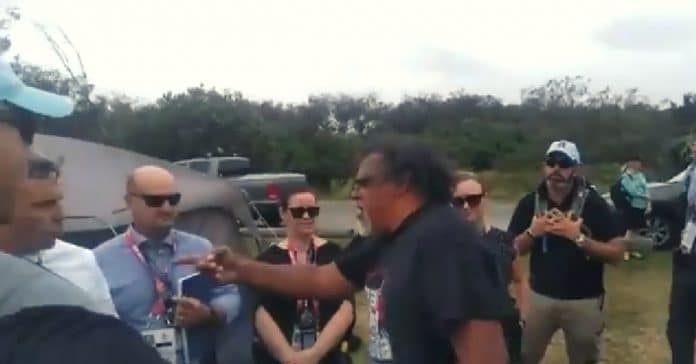 Aboriginal Protesters at the Commonwealth Games made lots of headlines last week but one of the most heated exchanges were left out.

On Friday morning last week, the protest group made headlines when police blocked them from staging a peaceful protest in Broadbeach. Video of police scuffling with protesters was shown all across Australian media and they were proud to announce that 5 protesters were arrested. But later that weekend a very different situation unfolded at Camp Freedom.

Police, fire services, tactical police, local council and even child protection personnel all descended on the main protest camp on Sunday in what was believed to be an attempt to evict the protesters from the camp. Video from this confrontation clearly shows a very strange series of events with personnel roaming around the camp without direction and not really making their intentions clear.

There was talk of hygiene and fire risks but after that the uniformed personnel were all standing around waiting for something to happen. But nothing happened. And that is when the tables started to turn on the joint strike force. Protesters began to question what was going on and asked Who’s in charge? Who sent you here? What are you’s doing?

It soon became clear that many of the personnel didn’t have an answer. We think they were expecting a reaction which they could have used to try and arrest even more protesters and close down the camp. News teams from Channel 9 and Channel 10 were also there on the ground and we are yet to see their footage of the incident on TV or on Social Media which shows how selective they are in their efforts to manipulate the wider public view.

But what happened was one of the most courageous and inspiring scenes we have witnessed during any frontline protest. Adrian Burragubba, who is best known for his tireless work standing up against Adani and the Australian government, got up in the faces of the instigators and began to ask them to leave. He was vocal but didn’t swear, he was aggressive but not violent against many personnel who were armed. He showed the same courage our ancestors did when they fought against armed settlers and police during the frontier era. He didn’t stop until they had all removed themselves from the campgrounds after he ordered everyone wearing a uniform that represents the crown to leave. He was backed up by Aunty Gwenda Stanley who recorded the vision and made her presence felt the whole time as a staunch front line activist.

So check out the video of the exchange below and make sure you share it around, it’s clear the mainstream media don’t want to share these stories, so it’s completely up to us. The media has demonised the protesters who gave up time and money to be at the protest and make history. Don’t let their efforts be silenced by the mainstream media.

Welcome to Country is an independent Indigenous news/media website. We publish the stories that aren’t being told in Australia’s mainstream media. 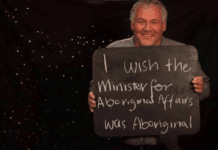