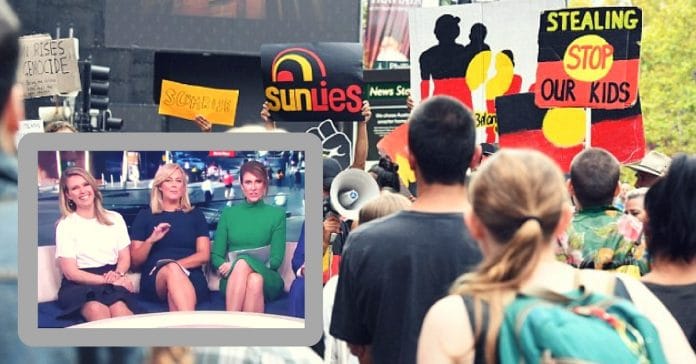 Sunrise have been labelled as cowards after trying to conceal the fact that hundreds of protesters were directly outside their studios.

Reports from viewers and protesters reveal that Sunrise resorted to a number of cowardly tactics to try and deny the presence of hundreds of protesters directly outside the studios in Martin Place, Sydney this morning.

Viewers and protesters were shocked after the live backdrop screen played behind the Sunrise hosts did not show a single protester. It appears Sunrise used pre recorded vision for this morning’s show. Protesters reported that the curtains were eventually drawn at the window where protesters were standing.

Despite these cowardly efforts, viewers did notice the sudden changes taking place to Sunrise’s regular broadcasts. After 7am, interview sections of the show appeared to be cancelled with news segments drawn out to make up for the time. Some viewers were also able to hear the vocal crowd of protesters even though Sunrise desperately tried to hide any vision of them.

Viewers also noted the irony when Sunrise aired a segment on bullying in Australia when Sunrise themselves continue to bully and demonise Indigenous people in Australia with their mainstream propaganda. Unbelievably, their segment on parental bullying today featured a young boy with dark skin as the feature photo of the story to further push their agenda.

Sunrise are yet to acknowledge the widespread backlash against their Hot topics segment from earlier this week. Even though many of the claims and statements made during the segment have been debunked as complete lies, Sunrise seems to think they can continue on as normal without any after thoughts or apologies.

Some protesters have vowed to continue protesting outside the studios. Smaller protests could happen at any time over the coming days and weeks. Protesters will rally out of sight from security and aim to catch the national broadcasters off guard with flash mob style protests.

Were you watching Sunrise this morning? Let us know what differences you noticed during Sunrise’s broadcast this morning. To watch what really happened outside the Sunrise studios this morning, check out the full coverage by protest organisers FISTT movement.

Don’t forget to share this article in order to fight back against the mainstream media attempt to wipe out Indigenous voices in Australia.

Welcome to Country is an independent Indigenous news/media website. Our focus is on the news and stories that aren’t being presented in the mainstream media.