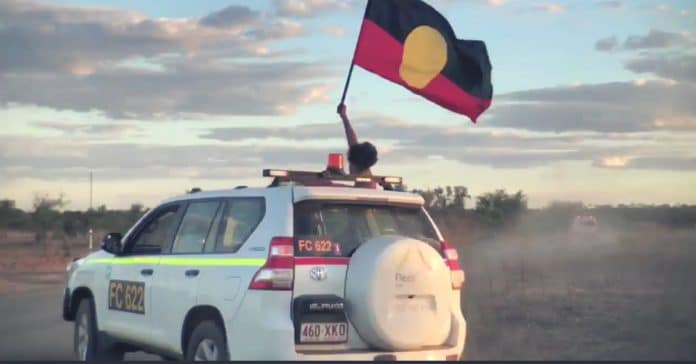 Inspiring vision of Waanyi warriors reclaiming the infamous Lawn Hill cattle station has been broadcast by the Waanyi people today.

Traditional Waanyi Owners have reclaimed ownership of the infamous Lawn Hill cattle station. The Lawn Hill station once had 40 sets of Aboriginal ears nailed to the walls of the station’s homestead. The brutal history is a common story across Australia where land was taken under the most shocking circumstances. Just as those who faced the injustices back then, today’s generation suffers the injustice of being left out and excluded from opportunities to develop the land the way we wish. This is changing on Waanyi land with this latest action by the Waanyi people. Watch below:

According to the media release by the Waanyi PBC, the Waanyi people wish to take back 100% full control of the station where previously 49% was held by New Century Resources under the joint Lawn Hill and Riversleigh Pastoral Company. The action comes after growing mistrust of the LHRPHC by the Waanyi PBC who claim they are being denied access to financial records which makes it impossible to know how much profits are being made under the LHRPHC name.

The Waanyi PBC also allege that LHRPHC membership records are not being provided on request and legitimate applications by Waanyi people are being ignored or denied. The partnership between the Waanyi Advancement Limited (WAL) and NCR under the LHRPHC was supposed to be an initiative that lead to financial empowerment for the Waanyi people but now, that only appears to be possible through complete 100% ownership and control.

Make sure to follow updates on this story by following Alec Doomadgee, the chairman of the Waanyi PBC on Facebook. We will be waiting to see the response by the media towards this historic action. You can be sure we will call them out if they choose to try and ignore these developments.