The 29th of April 1770 is a date that has been silenced like it never happened.

We all get out there and unite for many reasons but somehow many people have forgotten what happened on the 29th of april 1770. That’s the day the suffering began. it’s the day James Cook, the so called great British explorer landed on our shores in what some people call a discovery. But to the people there that day, it would have been a terrifying invasion of their land. A day when 2 warriors opposed Cook and and his crew from landing at Kurnell shouting ‘warra warra wai’ and waving their spears.

“for as soon as we approached the rocks, two of the men came down upon them, each armed with a lance of about 10 feet long and a short stick which he seemed to handle as if it was a machine to throw the lance. They called to us very loud in a harsh sounding language of which neither us understood a word, shaking their lances and menacing, in all appearance resolved to dispute our landing to the utmost though they were but two and we 30 or 40 at least.”

What happened next was a moment in time that cant be erased. It must take its place in history and be known to all.

“They remained resolute so a musket was fired over them, the effect of which was that the youngest of the two dropped a bundle of lances on the rock at the instant in which he heard the report; he however snatched them up again and both renewed their threats and opposition. A musket loaded with small shot was now fired at the eldest of the two who was about 40 yards from the boat; it struck him on the legs but he minded it very little so another was immediately fired at him; on this he ran up to the house about 100 yards distant and soon returned with a shield. In the mean time we had landed on the rock. The young man immediately threw a lance at us and another which fell among the thickest of us but hurt nobody; 2 more muskets with small shot were then fired at them on which the eldest threw one more lance and then ran away as did the other. We went up to the houses, in one of which we found the children hid behind the shield and a piece of bark in one of the houses. We were conscious of the distance the people had been from us when we fired. The shots could have done them no material harm; we therefore resolved to leave the children on the spot without even opening their shelter. We therefore threw into the house to them some beads, ribbons, cloths as presents and went away. We however thought it no improper measure to take away with us all the lances which we could find about the houses, amounting in number to forty or fifty”.

The effects of that day still echo today. Now almost 248 years later in museums overseas, sit the most important evidence that prove we have always been here and prove what happened on the 29th of April was invasion and theft. Whether it be the Gweagal shield in the British museum or the Gweagal spears (currently on loan by Trinity College) and on display at the Cambridge Museum of Archaeology and anthropology or artifacts at the Ethnographic museum in Sweden, they all have an enormous amount of history and culture inside them that cant be silenced forever.

To someone like me whose family were there that day in 1770, they are the most important artifacts in the world. They tell me who I am and where I come from. They are connected to me like the country they come from and the spirits inside them can never be at rest until they are returned home forever.

But to the powerful people who control the Gweagal artifacts plus thousands of other artifacts and human remains, they are just assets and another way to deny us our history and culture. They don’t care about the cultural value they have in Australia and they use many excuses to justify ownership but they can never own our culture and our history.

If we look at the current situation with first nations people in Australia and the treatment suffered, we see it all began on that day almost 248 years ago on the 29th of April 1770. That’s the moment when our lives changed forever and the only way we can move forward is to look through history and start making things right.

Giving back the Gweagal artifacts would be a significant moment in time not only for everyone in Australia, but also for British people. It can be a moment in time that brings us all together. On the 29th of April 2020, it will be the 250th anniversary of Cooks landing at Botany Bay.

So lets all unite for the worlds oldest surviving culture and support the repatriation of the Gweagal artefacts.

Donate to the campaign here https://www.gofundme.com/thegweagalartefacts
Or visit the new website here https://kamay1770.com/ 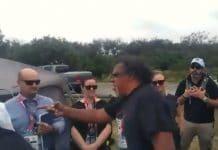 Media Blackout: the moment police were evicted by Aboriginal protesters