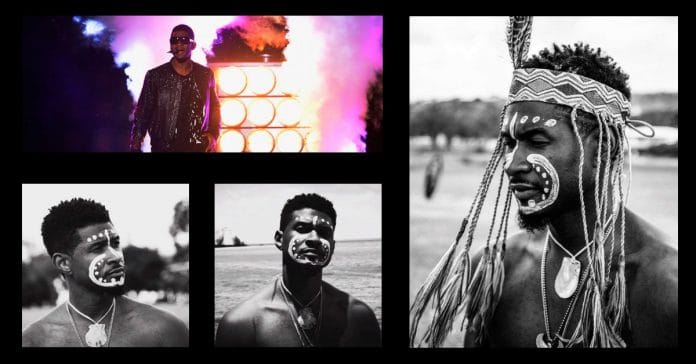 Social media went into a frenzy yesterday after Usher’s visit to Quandamooka country.

Usher is currently in Brisbane as part of the RNB Fridays Australian tour, but yesterday he took time out of his busy schedule to connect with one of the world’s oldest surviving cultures.

Usher felt honoured to be painted up by the Quandamooka mob and released the image above on social media. Usher’s experience also included learning one of the world’s oldest dance moves, “the shakealeg”.

The response from Indigenous people around the world was overwhelming with hundreds commending the artist for showing respect and connecting with Aboriginal culture while in Australia. As usual, we are yet to see any mention of this in the mainstream media.

After flying in by Helicopter to North Stradbroke island, Usher met up with the Quandamooka mob to learn more about their rich history and culture.

The RNB Fridays Brisbane show is on this Friday night before moving down to Sydney for a performance on Saturday night. The tour then moves on to New Zealand for one huge performance in Auckland. The tour includes RNB legends such as Lil Jon, Salt N Pepa, Eve, Taio Cruz, Naughty By Nature, Ginuwine, Estelle, Che Fu & The Kratez — Kings. The concerts are MC’d by Fatman Scoop.

To any ladies trying to claim Usher, yes, he is single right now. Yeah!!

If you would like to book your own cultural experience on Quandamooka country, check out q-coast.com.au for more info.