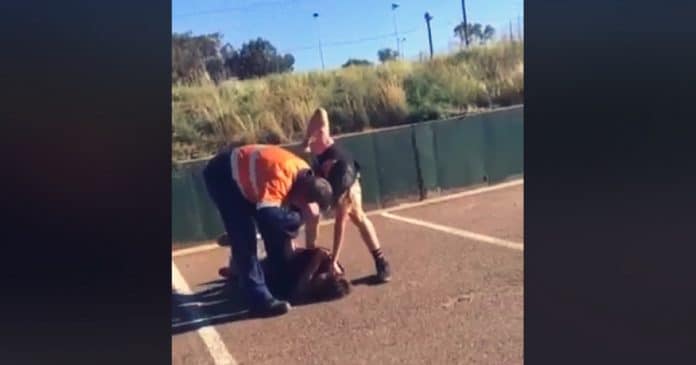 Sickening video has emerged from Port Augusta where a father and son are seen attacking a young Aboriginal teenager.

Police have already arrested both the father and son over the incident which took place at around 11 am on Monday the 11th of December 2017. Locals have also identified the work uniform that the father is wearing and have already made complaints to his employer. We will be watching this case closely to see how justice is served.

Update: The father was sentenced to two months jail in May 2018.

This is not the only disturbing news to come out of Port Augusta either. In October, video was sent to us showing a group of Aboriginal kids being chased down by a four wheel drive. In that video a boy narrowly escaped being hit. This incident was not reported by the media at all. It is this censorship of news and the lack of justice as seen with the case of Elijah Doughty, that allow these incidents to continue.

Welcome to Country is an independent Indigenous news/media website. We publish news and views that are often ignored by Australia’s mainstream media. Follow us on social media to make sure you never miss the stories we publish.