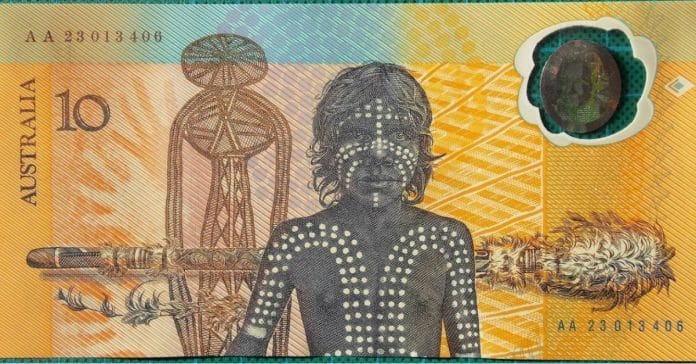 Did you know this was the world’s first polymer bank note released into public circulation?

It was first released in 1988, the same year the $2 coin was released. However unlike the $2 coin, the $10 notes were withdrawn in 1993 after just 6 years of circulation. It was later discovered that the release was actually a secret trial to test how polymer notes would last before the release of newer notes that were introduced during the 1990’s.

The 1988 Bicentennial $10 note was introduced under the theme of settlement and aimed to represent both Indigenous and British settler history.

When the Reserve Bank of Australia released the note, they gave information about the artist behind the the Morning Star Pole (Terry Yumbulul) and they also stated that some of the background artwork was commissioned by the bank from Aboriginal artists. Unfortunately, the only information given about the young Aboriginal boy is that he is an Aboriginal youth… that’s not a lot of information for someone who is such a striking part of the world’s first polymer bank note.

The other side of the note is a representation of early settler days in Australia and features the first boat of the First Fleet to anchor in Sydney Cove. It’s disheartening that the settler history goes into great detail, down to the name of the ship (the Supply) and the reason it was chosen, but the information about the Indigenous side of the note is absent of any great detail. Efforts could have been made to note the name, tribe and location of the boy and the artworks featured, however it appears the efforts made were simply tokenistic.

Update: After our initial callout for information, it took less than 24 hours for family members to come forward to let us know the Aboriginal youth is a former dancer and Lardil man from Mornington Island. The family are excited to see he is finally being recognised after 30 years. They are currently in the process of contacting him to see if he is happy for his name to be acknowledged.

Welcome to country is an independent Indigenous news/media website. We publish news and educational articles with a focus on stories that often remain absent from Australia’s mainstream media.