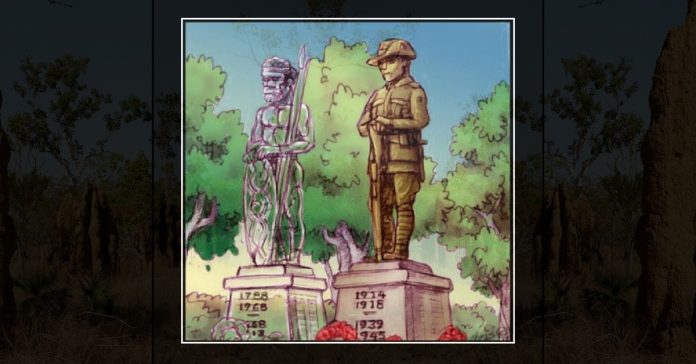 With all the momentum building over January 26th it’s time we start to have a more balanced dialogue on this issue that, I suppose in the words of Uncle Sam Watson, ‘certainly stifles debate’. Author and Brisbane Black, Watson recently schooled Anthony Dillion on the Today Show last Thursday 11th January.

Probably the first time in a while we actually got to see to two Blackfullas debating a topic of national significance on breakfast television.

Dillion’s response was flattering to say the least; ‘Oh it’s just a great day to throw a frisbee, hang out and have a barbie’. Yes you heard that right, those trying to ‘Save Australia Day’ such as Anthony Dillion choose to campaign on an issue because they feel like they can’t throw a bloody frisbee on the 26th of January!

Watson, a veteran in Aboriginal Affairs and Blak Politix didn’t have time for such baseless statements, ‘Australia the nation came into being on January 1, 1901. That would be a more appropriate day because January 26th just commemorates a date a a small flotilla of British ships land in Port Jackson back in 1788 to found the colony of NSW’ he said.

In 1788, there was no thought of Australia as a nation back then. In fact the whole continent was called New Holland by the Dutch and only half of the continent was claimed as the British Colony of NSW, the other half was still named New Holland but remained uninvaded oops sorry I’ll have to be politically correct ‘unsettled or undiscovered by the British New South Welshmen until 1829.

In my teens I used to look forward to Australia Day, I was covered in the Australian Flag getting drunk as much as I could, that’s what it’s all about ain’t it? Dubbo was the best place for it and probably still is for those who love a day at the Macquarie Inn listening to Darryl Braithwaite performing live for gosh, who knows how many years now. #DarrylLovesDubbo. I feel as though now as a 24 year old I’ve decolonised my social lens and see shit for what it is, Yassss Clayton is Woke!

The Australian nation and its communities must go through a process of truth, justice and healing. Your only confronted or offended if you choose to be but the bottom line is that we are yet to own our truth, deliver real justice and heal together as a community who love to call this place home.

So you can throw your frisbee Anthony Dillion, but it’ll have to wait until after you attend the dawn service in your local community commemorating the ultimate sacrifice that your old people took for the survival of future generations.

What our people have been campaigning for centuries is that were asking you to mourn, honour and celebrate our survival with us on January 26th, fly the Australian, Aboriginal and Torres Strait Islander flag all together at half mast in honour our shared history, because let’s face it, we can’t change the past but we can change the way we learn from the past.

Each local community commemorates the events that took place in their respective regions and tribes because we’ve had many tribes wiped off the map by colonial officials under martial law and by Native Police. It’s all about Truth, Justice and Healing as Peoples who call this place home. The 26th of January is basically like the First Nations Anzac Day, but with a deadly Blackfulla twist, as first proscribed in 1938 by a delegation of Aboriginal leaders a ‘Date of Mourning’ for the events that took place on our soil, not on a foreign jurisdiction.

By 12pm we honour and celebrate our survival and have a fun family and community day out the way we have been doing for decades at our local Yarbun and Survival Day Concerts alongside our Australian brothers and sisters.

Oh yes which date can Anthony Dillion throw frisbees in the morning? Okay the most appropriate date to me, and I’ve thought hard for years.

That’s another thing for me, Change has to come in a package. A new date to celebrate, a new flag that reflects this land not the white mans motherland and a new anthem to sing that’s doesn’t make us sound like blatant hypocrites!

But I guess I do get that it’s great to have a date that celebrates our country as a whole. It’s just the only problem is the way it’s currently done is a national disgrace and hopefully lessons have been learned on how to celebrate all this is great about our Great Southern Land.

It is quite astonishing that the whole concept of ‘Australia Day’ is not as inclusive of diversity as it claims to be because, fundamentally, Australia Day always has and always will be the white mans holiday traditionally celebrating the arrival of the white mans motherland.

Of course there is a date to celebrate all that is unique and beautiful about the British Commonwealth of Australia, just not on January 26th. Now, like every other colonised sovereign nation, ideally that date would be when we gain our independence from our colonisers. This is still yet to happen as the Australia Act 1986 is a piss weak Declaration of Independence. This date will come when we decolonise from Great Britain and become our own republic under a sovereign treaty the original First Nations, the Crown to establish and constitute an Australian Republic underpinned by both laws.

We don’t lose a public holiday we change the meaning to the ones we already have because they are important to keep. We’ll also have THE best New Years in the world! Bringing in the new year celebrating Federation Day that legitimised the name Australia.

So let’s just be explicitly clear to the politically correct victim brigade ‘Save Australia Day’ campaigners such as Jacinta Price, Warren Mundine and Anthony Dillion and Mark Latham; you can do everything you would have done on the 26th only this time you get to do it 3 week earlier on the 1st. You can still have a public holiday in the 26th only this time we mourn, honour and celebrate our survival in respect of our shared history that’s shaped us into who we are today.

That’s my vision for how we as a nation of collective communities mark the 26th and the 1st of January and I hope it could be aligned with yours as well.

Clayton Simpson-Pitt is 24 year old Yuwaalaraay/Gamilaraay Murri. Born in Walgett, raised also in Dubbo and currently resides in Canberra at the Aboriginal Tent Embassy. Clayton holds a Diploma in Aboriginal Knowledges and is currently studying a Diploma in Laws at Charles Darwin University.